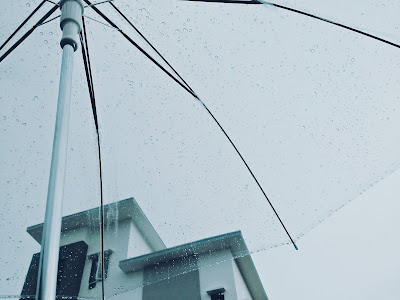 "thunder. lightning. here and there."

"then why not we talk about thunder and lightning now?"

"how does thunder and lightning happen?"

"something to do with electricity and stuff i guess?.."

"ah, i'm not even finished yet. the 'boom' sound that we hear, is the sound of rapid expanding air surrounding the path of the thunder bolt piercing through. the air got heated by the heat of the hot, no, very hot thunder, and thus expanding rapidly. ah nevermind.. just a theory anyway, i even don't know whether this proven or not."

"enough with all those theories laa.. so, any verse from the qur'an talking about thunder and lightning?"

"or (it is) like a rainstorm from the sky within which is darkness, thunder and lightning. they put their fingers in their ears against the thunderclaps in dread of death."

"the skies is really frightening during a thunderstorm."

"(He) who made for you the earth a bed (spread out) and the sky a ceiling and sent down from the sky, rain and brought forth thereby fruits as provision for you."

"isn't these two verse compliment each other?"

"both talking about the skies?"

"while the early verse talk about the dark frightening phase and dreadful moment of the thunderstorm, the latter told us what follows after that; a beautiful cheerful rain that brought life to the land."

"hmm, something deep to ponder.."

if all these years, all you going through in your journey was frightening dreadful thunderstorm, then may Allah grant you strength to endure it bravely and patience to wait some more for the cheerful rain to come as your beautiful garden of flowers will comes to life and you reap the fruits of your harvest in joy.